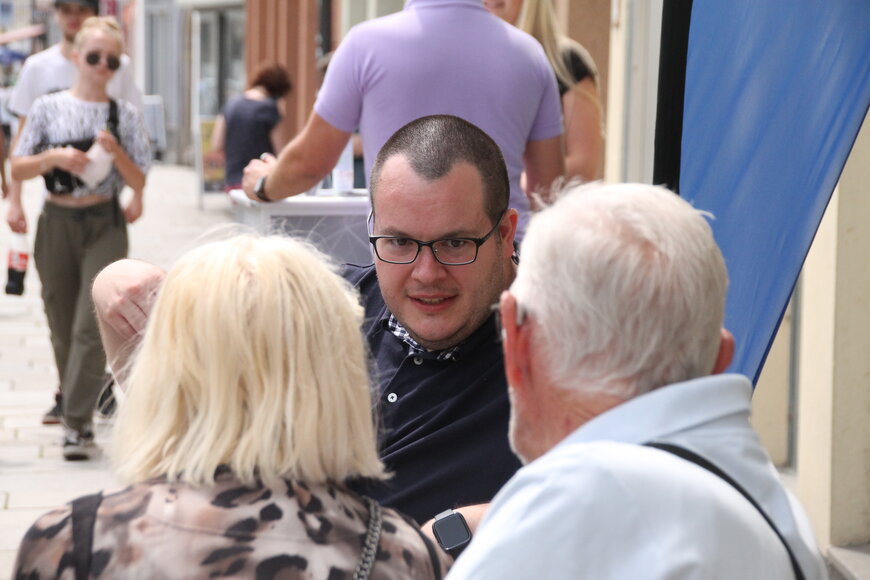 No topic is discussed more emotionally than climate change. While almost 90% of Germans agree in principle with the increased use of green energies, it becomes more critical when this is going to happen at their own doorstep. This absolutely has to be resolved by politics and science.

The East Bavarian university network TRIO is trying to do this in the first week of July with an unusual campaign. Five scientists will sit on a bench in five different cities, the so-called “Science Bench”. In Amberg, Deggendorf, Landshut, Passau and Regensburg – in the middle of the city. Anyone who wants to can sit down and chat with our scientists for a little while. They can talk about wind turbines, smart grids, electromobility, rural development, digitalisation, healthcare, or ideas and concerns related more closely or more broadly to the energy transition. Prof Dr Thomas Sauer, Scientific Director of TRIO, says: “On the one hand, with TRIO we want to intensify the exchange between the eastern Bavarian universities and the economy, but above all we also want to get in touch with the people in our region and make it understandable what is happening at the universities and colleges. That is precisely the goal of the Science Bench campaign. Here, researchers and interested citizens can meet and discuss in a very informal way.”

Climate change is, of course, only superficially a purely ecological issue. After all, the various approaches to solve the problem of minimising our CO2 footprint as quickly and sustainably as possible extend into all areas of life. And they will stop at no one. “Our researchers are keen for people to understand what options are available, where we stand, how things are connected and, above all, what all this means for them,” says Dr Jörg Kunz, responsible for science communication at the Deggendorf Institute of Technology and coordinator of the TRIO-Science-Bench campaign. That’s why you go to the city. To exchange ideas at eye level. “We want a dialogue,” Kunz continues, “we don’t want a lecture on the marketplace, but also to record what moves people and what ideas they have for a better world.”

The Science Bench is a communication format that goes back to an idea of Prof Katja Becker, President of the German Research Foundation. The charm of this kind of science communication lies in the personal closeness that is created between people on the street and researchers. Of course, you only reach a handful of people this way. But they are different from those who visit an Open Day or a Long Night of Science, for example. We speak of “passive supporters”, who generally do not take advantage of such offers by colleges and universities, but without having a negative attitude towards science. “It is estimated that about half of the people belong to this group,” Kunz report. He says that science has recognised that much more integration and participation of the population is needed. The Federal Ministry of Education and Research is therefore also focusing on participatory science communication projects in the Year of Science 2022. Under the motto “Nachgefragt!”  Kunz is pleased about this development: “With the Science Bench, we in Eastern Bavaria have already gone one step ahead, so to speak. But the nice thing is, there’s more to come.”

Bild (DIT): The Science Bench in Deggendorf already happened in 2020. The topic was Artificial Intelligence.