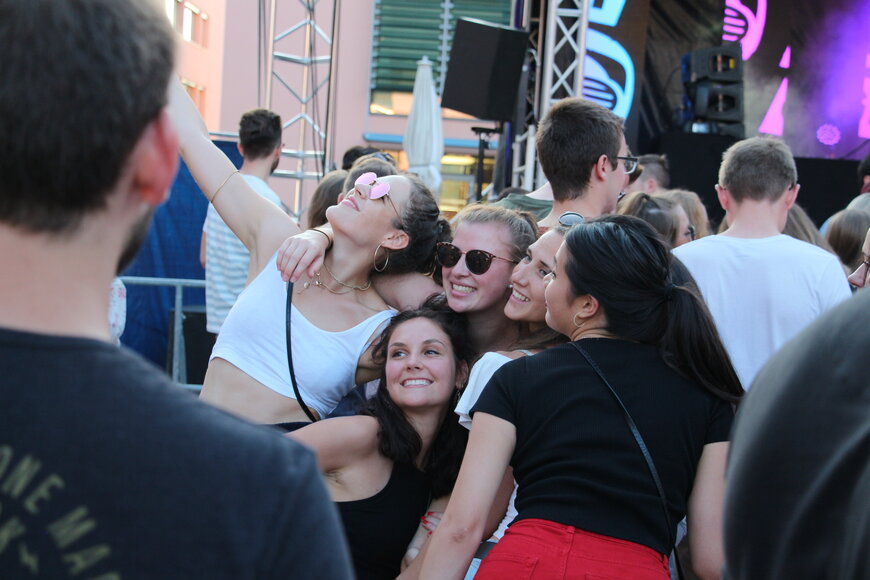 The campus turns into an event location again

The Stadt Land Fluss Campus Open Air is back

Stadt Land Fluss, the festival of the Deggendorf Institute of Technology (DIT), is back this year. After a forced break of two years, all music and concert enthusiasts from the region can look forward to four days of music on the DIT campus during the Whitsun holidays. Pizzera und Jaus, Stahlzeit, Ringlstetter und Band and Moop Mama will be on stage.

The kick-off on Thursday, 16 June will be spectacular: Stahlzeit are coming. They are Europe's most booked Rammstein tribute show and, thanks to their elaborate stage show, a unique live experience not only for Rammstein fans. On Friday, 17 June, Ringlstetter and band will present their latest programme "Fürchtet Euch nicht, es geht weiter!". From rock to hip-hop, everything is there. Of course including the well-known "Ringlstetter" sound. On Saturday, 18 June, Moop Mama, a ten-piece brass band from Munich, will perform. They have become known through their spontaneous performances in parks, in front of universities or in public places. Pizzera and Jaus' tours are often sold out within a few days. There are only a few tickets left for their performance in Deggendorf on Sunday, 19 June at the Epoxy Store Deggendorf.

Tickets for the Stadt Land Fluss Campus Open Air can be purchased at the Tourist Info in Deggendorf on Stadtplatz, at the Epoxy Store Deggendorf or via Eventim. Further information can be found at www.th-deg.de/slf-campus-open-air.de.

Bild (DIT): The Stadt Land Fluss Campus Open Air is the festival of the Deggendorf Institute of Technology for students and all people from the region.