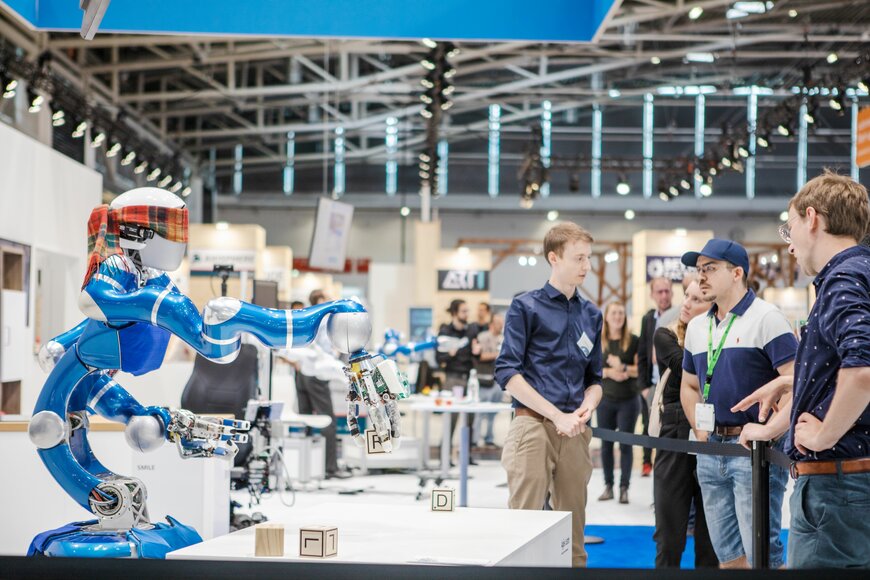 At the end of June, the joint research team of the Deggendorf Institute of Technology (DIT) and the German Aerospace Center (DLR) presented itself at the "Automatica". Under the direction of Prof. Dr.-Ing. Berthold Bäuml, the latest research results in the field of "Intelligent Robotics", or more precisely, on skilled, robotic manipulation, were shown. And they amazed not only the scientific community.

Automatica is the leading global trade fair in the field of automation and robotics. Every two years, around 30,000 visitors come to Munich, with a high proportion of trade visitors. "We were able to show a wide audience our work on learning skilled in-hand manipulation, which is unique in the world so far," reports Prof. Bäuml enthusiastically. The idea behind this is that a robot in a multi-fingered hand moves an object without dropping it. And it does so upside down and without looking - in other words, only with the help of the sense of touch. "This complex exercise," explains Bäuml, "was learned completely independently in a simulation in just 36 hours using so-called "reinforcement learning" and then executed with the real hand of the DLR humanoid "Agile Justin"." What may sound simple to people who are not familiar with this topics is in fact not. The work of the DIT-DLR laboratory "Autonomous Learning Robots" attracted great interest and recognition at the fair. And not only with the Minister of Science, Dr. Markus Blume, but also with the numerous, internationally highly renowned scientists represented as well as with some important CEOs of the robotics industry. Bäuml reports that his team succeeded in surpassing the results originally shown by the company OpenAI for learning robotic in-hand manipulation. And OpenAI is not just anyone. After all, the US company is funded by Elon Musk, among others. OpenAI had recently abandoned the topic because of too many problems. "To have successfully stayed with it," says the DIT professor, "makes us a little proud."

The DIT-DLR Joint Research Lab is a joint research group of the Deggendorf Institute of Technology and the Institute of Robotics and Mechatronics of the German Aerospace Center with laboratories at the BITZ in Oberschneiding and the DLR site in Oberpfaffenhofen. Since the beginning of 2022, work has already been underway on the commercialisation of the robotic hand as well as the intelligent learning processes for applications in industrial production as part of the "SmartHand" research project funded by the Bavarian Ministry of Economic Affairs together with a company from the Deggendorf region. This is seen as a key technology, as only through a massive expansion of automation will production in Germany still be possible at all in the future. Especially because of the shortage of labour.