The tasks of the Gesundheitscampus Bad Kötzting in research and teaching are: 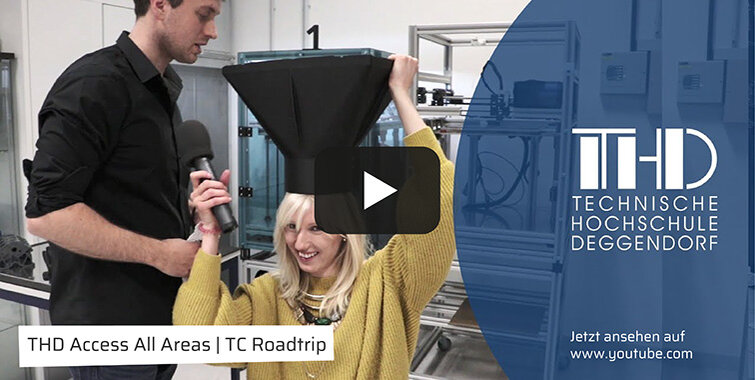 How to find us.

About the Health Campus Bad Kötzting

It was officially opened on 22 October 2012 by the Bavarian Minister of State for Science, Research and the Arts, Dr. Wolfgang Heubisch.

With the help of private donors, the university has set up the following institutions on the health campus to fulfil its tasks:

The modules Inno4health, Care, Digitalisation, Occupational Health Management, Management and Soft skills offer versatile content for further education and training measures that can be individually tailored to the needs and time possibilities of companies in the health sector. Inno4health relates to health science innovations and technologes, e.g. regarding telematics infrastructure, data protection and documentation, AI or digital health applications. Through a digitalisation check, the status quo in the company is first to be ascertained and then corresponding courses are to be offered to improve digitalisation in the company. The network conferences are to be organised, e.g. in the format 'Digi- or Barcamp' and pass on the latest research and projects of the Deggendorf Institute of Technology to the companies. In addition, they are intended to strengthe the cooperation of the actors involved in the region. Through Inno4health, the participating companies gain better access to the knowledge transfer of the university and can position themselves better together in the network to recruit skilled workers.

The project "Competence Centre" in Bad Kötzting for the training and further education of nursing staff and health professions in the Bavarian-Czech border region, which is carried out by the Deggendorf Institute of Technology, aims both at strengthening the border region around Bad Kötzting. For this purpose, a competence centre was established, which is located in the premises provided by the district of Cham in the former district vocational school Cham in Bad Kötzting. The project is funded by the Bavarian State Ministry of Finance and Home Affairs for a period from 22 March 2016 to 31 December 2020. 7

The overall management is the responsibility of

The courses offered by the Competence Centre are aimed at healthcare personnel from Germany and abroad who have been trained for one or more years, focusing on the promotion of specialist expertise and German language skills in the context of the recognition of foreign nursing qualifications, support in competing the three-year nursing training course in Germany and the provision of skills for encountering different cultures in the healthcare system.

Accompanying course on the way to recognition

Accompanying course for nursing professionals with foreign vocational qualifications to help them prepare for the successful completion of recognition measures.

The accompanying course offers expert knowledge, language support and practical training. It accompanies the participants in their independent preparation for the successful completion of recognition measures. Furthermore, nursing professionals who have already received their professional recognition and are interested in seminars in intercultural exchange are also very welcome. Thanks to the funding, there are currently no course fees. In order to benefit as much as possible, we recommend German language skills on B2 level (which is also relevant in the professional recognition process) or B1 level.

Together we work on realistic care situations, the necessary expertise and go through the phases of the care process. Both the needs of the course participants and the experiences of the seminar instructors influence the selection and order of the topics, which are deepened theoretically and practically.

Additional offers
Support in arranging internships and finding suitable language courses with a target level of German B2.

The project "Competence Centre Bad Kötzting" is currently in the evaluation & research phase. Therefore, no "accompanying course on the way to recognition" is offered anymore.

The basic course "cultural companions in healthcare professions" offers leaders, practical instructors and other multiplicators in nursing who dare to take an international look at nursing concepts and professional identities a profound short training course on culture-sensitive nursing and teamwork.

The content and methods worked on can be transferred and expanded to other cultural dimensions later on, either on their own initiative and/or in constructive seminars - for example, with regard to generations, graduates from nursing training and studies (in a quality-oriented Skill & Grade Mix), questions of corporate culture or understanding of nursing.

The course covers 6 seminar days in approximately 3 months. They are connected by practical exercises. The seminars take place at the Centre for Further Academic Education. More information can be found here.

You have successfully completed a nursing assistant training course at home or abroad? Would you like to shorten your nursing training by 1 year? Then we can offer you a training group, seminars and support in shortening your nursing training. Thanks to the support of the Bavarian State Ministry of Finance, State Development and Home Affairs, the course is currently free of charge.

Lively learning in small groups
In a total of 18 days we go through the contents of the 1st training year together. You will receive seminars in which you will succinctly grasp the essentials of a subject area, practice and at the same time be able to establish connections to your practical experience. Together with our competent learning counselling, you can already cope with the shortening of your training in the 2nd year of training and thus have free capacity for exam preparation in the 3rd year.

In addition to the courses offered at the Healthcare Campus Bad Kötzting, a regional network with actors in the healthcare system was formed as part of the project. Current developments in the project are discussed and information exchanged in network conferences.

Below you can find extracts from the networking activities:

On 17 March 2017 the 1st network conference took place at the competence centre Bad Kötzting. Invited were central actors of the nursing sector from the districts Cham and Regen. The conference was held in the prevention centre "Sinocur", which is located in the same city. The conference gave an insight into the background and current developments of the accompanying courses for (pediatric) nurses with foreign professional qualifications who (would like to) work in the regional facilities as well as the enclosed course on culturally sensitive care with regard to the residents/patients & culturally sensitive cooperation in international teams. A further component was the presentation of the project goals and discussion of current issues and challenges in this regard to strengthen nursing care in the region.

A second networking meeting was held on 4 May 2018 with regional actors in the nursing sector. The conference was held at the "Sinocur" in Bad Kötzting. Here the participants had the opportunity to learn about the latest developments in project development. Afterwards, Mr Bernhard Kratz, M.A. Head of Nursing Services at the Neumarkt clinics, gave a lecture on the topic "Skill- and Grademix in Nursing. Framework conditions and starting points for practical implementation". Afterwards, the participants exchanged views on the topic "mix of skills, roles and responsibilities in nursing".

In the new premises, in the basement of the former district vocational school Cham, the 3rd Network Conference at the competence centre Bad Kötzting took place on 10 July 2019. As at the previous networking centre is in the last year of the project, the participants looked back on exciting experiences and encounters. Furthermore, the guests were given first insights into the evaluation results and the future development of the project.

Among the main topics: Reflection on the course contents, establishment of an expert board for future project monitoring and reports from the respective institutions, the fourth network conference was held on 27 February 2020. Thus, the leading and executive positions in nursing care gathered in the new seminar rooms of the competence centre. Interactively, new perspectives for further development were worked out. Naturally, the respective experiences and opinions were taken into account.

Our offices are located in the building of the former distric vocational school on the ground floor, room U1.03 and U1.04.